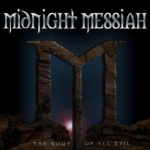 Here we have an old school Heavy Metal band from the UK. "The Root Of All Evil" is their debut full length, which includes 11 songs of technical and simple riffs, that make an interesting and enjoyable album. One of the album’s highlights is ‘King Of The Night’, a well structured song influenced without a doubt by those killers 80s bands. The guitar sound in that song is just terrific. The band members have huge experience in heavy music and you can hear that in their songs. However, I have to say that ‘The Wise Man Of Roklar’ is the weakest song, which is just too boring for me due to the chorus which makes the song irrelevant. I personally would’ve liked to hear some more aggressive vocals instead. In conclusion MIDNIGHT MESSIAH is a band that will not disappoint us, but it is not a band that made me lost my mind either. Anyway, you can contact these guys here: www.facebook.com/midnightmessiah, label contact: www.coldtown.com