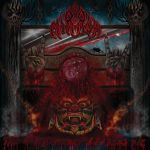 Formed in 2015 by former ELECTRIC WIZARD bassist Tas and including American guitarist Matt Olivo (CRYPTIC SLAUGHTER, REPULSION), MIRROR currently running their base from Cyprus. Hardly any current band manages to perform so skillfully as SAXON, MERCYFUL FATE, the SCORPIONS and all the other mighty peers. Yet, from time to time, devoted forces sprout out to pay their homage to the long, worn body of classic Heavy Metal and Proto Rock from the late 70s and early 80s! So is MIRROR undertaking and at the latest, since their predecessor “Pyramid Of Terror”, this troupe now making the fans of classic steel excited with their healthy Hardrock dose with somewhat rougher traditional Metal, that sounds fresh and spirited. Compared to the thunderous predecessor, on the latest album, banteringly titled as “The Day Bastard Leaders Die”, you will have a thoroughly traditional album with strong songs, instrumental finesse and outstandingly powerful vocals. Suffice to say, with heavy loads of old school Metal riffing and unrelenting shredding solos, nine tracks of this album are filled with melodic twists and catchy turns-abound at every corner. Whether it’s the fury opener ‘Infernal Deceiver’, crackers like ‘All Streets Are Evil’, thumping ‘Souls Of Megiddo’, loud and gut-puncher ‘All Streets Are Evil’, or the probing, and almost progressive title track, where the guitar leads that accompany the vocals, will make Ritchie Blackmore feel closer. With such a flareup like record, which wholly intended to catch the force and spirit of a classic era, you just don’t need an artificially inflated production. No wonder, the group was gritty to sound as authentic as possible, yet the production seems to put the vocals a bit too much in the foreground, even though vocalist Jimmy Mavrommatis is a beast of soaring range! Nonetheless, the way they wrote and played their songs, easily make up for all that. With all these forays, the third full length of MIRROR is one heavy surprise of 2022. “The Day Bastard Leaders Die”, will certainly lure classic Metal fans and sing along loudly, with many repeats highly likely. To explore more about the band and label, visit www.facebook.com/mirrorheavymetal or www.facebook.com/cruzdelsurmusic