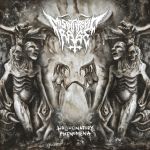 “Hallucinatory Phenomena” is the fourth album from Polish trio MISANTHROPIC RAGE. All of their albums, including this one, have been released by the excellent Polish label, Godz Ov War. Upon a little research, I found that MISANTHROPIC RAGE’s music has been described as Avantgarde Black Metal. Immediately, bands such as ARCTURUS, BORGNAKGAR, ULVER and VED BUENS ENDE came to my mind. But these Polish guys have a different approach, leaving much of the progressive parts out. Instead, they add lots of aggression and a much more dense atmosphere, including some really ethereal instrumental parts and huge clean vocals. Actually, in my humble opinion, these two elements may be the main reason behind the Avantgarde tag. Performance wise, there are no instrument pyrotechnics, but a solid execution by A.R. (guitars / vocals), W. (bass / vocals) and Curse (drums). I mean, these guys know their way around the instruments and the music style they are creating, combining fast, slow, Doom Metal-ish and even Folk influenced passages. Mainly dwelling in mid paced rhythms and heavy music pieces. Mystifying guitar leads, a constant interplay of eerie melodies and harmonies, thick guitar riffs mixed with pounding bass lines, all topped by a brilliant drum work. Finally, you won’t find high pitched screams here. The vocals are mainly deep grunts which only accentuate the anger of the music and enormously contrast the clean vocals used in the atmospheric parts. Another fine feature in this album I might say. The music in “Hallucinatory Phenomena” has a common denominator: the unexpected. When you think the song has taken a certain path and you can almost tell what is coming next, it varies and morphs into something totally different but all within the same realm. The varying moods, so to speak, are so perfectly tied to each other that it feels natural, yet you cannot deny the feeling that there is something unnerving below the surface. I dig when bands challenge the listener in any way, above all when they find themselves basing their sound in proven styles, but also incorporating enough aspects to throw you off in a beat (no pun intended). So please go ahead and get this album. Fans of the aforementioned bands take note. But I would definitely recommend this album for any Death and Black Metal fan out there. “Hallucinatory Phenomena” has a lot to offer upon multiple listens. As for me, I am going to check MISANTHROPIC RAGE’s back catalogue as soon as possible. And I am sure this will be an interesting journey. Find more info on the band at www.facebook.com/misanthropicrage and their label at www.facebook.com/godzovwar