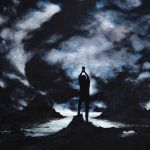 In the past few years, the Black Metal scene in Iceland really exploded and became more than an insiders’ tip. Once it were SOLSTAFÍR who paved the way before they changed their path and became a band that conquered their own cosmos with their Post (Black) Metal style. Now there is a new generation of young Icelandic bands who are out to show the rest of the world the grandeur of real Black Metal with atmosphere, harmony and beauty. Asides from the already well known SVARTIDAUÐI and SINMARA, who raised a lot of dust this year already with their fantastic new album “Hvísl Stjarnanna“, there are also bands like CARPE NOCTEM, NAÐRA and of course MISþYRMING. Four years after their debut album “Söngvar Elds Og Óreiðu”, they are back with a new album called “Algleymi”, and this record really is a damn great one! The fierce opener ‘Orgia’ is a perfect start into the album, since MISþYRMING manage the feat to combine fury and epic in one song that, combined with the well placed breaks and the shimmering high pitched guitar harmonies, just knocked me off! This is a really perfect opener for a Black Metal album in the year 2019! With ‘Með Svipur Á Lofti’, this album takes a certain nod to DISSECTION in harmonies and melodies, but the breaks are very well placed again and turn this song much more in the near of atmospheric Black Metal. Yet, the guitar solo parts towards the end are very old school and a little Folk as well. The desolate harmonies are the strength of the mid-paced ‘Ísland, Steingelda Krummaskuð’ who fit the dismal lyrics of the song, making it a beauty in the wastelands. The wonderful gloomy instrumental ‘Hælið’ takes the album back into more shallow waters and ends the first side of the album in a beautiful way. But the start of the second half of the album is not a harsh one, as ‘Og Er Haustið Líður Undir Lok’ is more slow paced, with hints on classic Metal and high pitched guitar harmonies dominating the song. A certain chaos defines the basic structures of ‘Allt Sem Eitt Sinn Blómstraði’, a song that feels like the fight between dark and light, with the darkness gaining the upper hand. ‘Alsæla’ starts with pure fury and dominating guitars, fitting to the title (‘Alsæla’ is ‘Ecstasy’ in Icelandic). But again wonderful breaks mellow the rage, bringing back the dark beauty that is typical for MISþYRMING on this album. It’s up to the title track to give this record a worthy end. And ‘Algleymi’ definitely is that proper last song. The combination of desolate guitar harmonies and countless breaks makes this song a spiral turning down just to end in the ever-present beautiful darkness. Looking on “Algleymi” in its entirety, I can only state that this album is a constant walk at the brinks of emotions and atmospheres, but a walk worth going to the end. In case you want to find out more and maybe risking an ear or two, visit www.facebook.com/misthyrming or misthyrming.bandcamp.com. You should also visit their record company at either noevdia.bandcamp.com for listening or www.noevdia.com for buying.