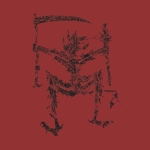 After a somewhat weird intro of what seems like an SW radio looking for extraterrestrial signs for nearly three minutes, we are taken into the proper music of MONSTRAAT’s second album, created by a Swedish duo that plays raw Black Metal. The production is primitive. In fact, they decided to record it with cruder means than they did their previous album, and it does sound like you are in the rehearsal studio with them. But I don’t mean this negatively. It sounds much organic and untampered with, and despite the rawness of the lo-fi sound it does have production. Most of all it’s got actual good riffs, and that is what makes all the difference. Sometimes it sounds a little Punk Rock, but the tone is definitely on bare knuckles Black Metal, with aggression, speed, anguished wails, pretty much in the vein of DARKTHRONE and derivatives (to a greater or lesser extent) like URGEHAL, ARMAGEDDA and the likes, and with lyrics about the end of humankind and death in general. Included is also a cover of ‘Luziferion’ by KATHARSIS, one of the band’s greatest references. I like the Black Rock vibe, I like the speed, and even though there isn’t much originality here at all I guess they are defending their view of what Black Metal ought to be. Bottom line is, it’s been done, but they do a good job at it nevertheless. Tracks like the opening ‘Black Soils Rise’ or ‘Angel Harvest’ have something going for them. If you want to find out more about these rabid Blacksters, go to www.facebook.com/monstraatofficial, www.facebook.com/fallentemple666