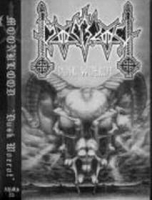 One of Germany’s finest Black Metal bands with their final stroke: this mini-album was originally supposed to be released as a split LP with NARGAROTH but as this is not going to happen (NARGAROTH and Sombre Records blame the other party), and the vinyl version will probably not be out before the end of 2003, the sheer brilliance of this recording made the Colombian label A.Y.M.S. release the songs on tape (limited to 666 copies, pro-tapes and a different artwork as the LP version). MOONBLOOD’s last recording offers everything that a fan of the band can ask for: fast and raw Black Metal without keyboards, yet always melodic and the incomparable, to be recognized within a thousand others, vocals of Gaamalzagoth. This is probably not MOONBLOOD’s best recording (which in my opinion is the "Taste Our German Steel" LP), but a couple of other bands were lucky if their recordings were of this quality, and soundwise this may be the best MOONBLOOD have ever done. The tape consists of four songs: ‘Dusk Woerot Part I-III’ and ‘Born To Live Under The Shadows Of Damnation’. ‘Dusk Woerot Part I’ is more like an intro, yet ‘Part II’ and ‘Part III’ offer so typical material that I simply cannot get enough of, fast Black Metal always with this incredible (sometimes rather medieval) melodies that you simply cannot get out of your head after listening to it for three or four times. Especially ‘Part III’ proves this perfectly. ‘Born To Live…’ then shows the band from its more mid-tempo approach. I simply cannot describe how incredible I think this album is, but MOONBLOOD are so unique (while unfortunately this word is far overused) and have been ever since their incarnation in 1994. Due to the import prices this tape could be comparably high but this release is worth any cent, and as the band decided not to press just another 100 copies edition this will possibly be available for about 6-8 Euro which are well spent here. The final gravestone is set with this tape. Rot in peace and thanks for a couple of more-than-great albums over the years. Contact: A.Y.M.S., c/o Arctthuro, A.A. 36531, Cali – Colombia