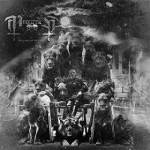 Ok, so MOONREICH are one example of a band that I was turned off by the corny name initially, but who grew to dig after listening. To me, the name MOONREICH either sounds like some goofy teenagers going from SLIPKNOT to their Black Metal phase, or some half-baked NSBM moron shit. But, it turns out that these Frenchmen craft some quite heavy and varied stuff. This is far from droning and simplistic material; MOONREICH has many structural changes in their music, all supported by thick guitars and a rather crushing and real drum sound. The vocals also stood out for me, bringing to mind that desperate and whiny Meyhna’ch screech (MUTIILATION). I guess for comparison, MOONREICH’s approach could be compared to AOSOTH somewhat. Both bands share similar twists and turns and a high level of professionalism. So, in a nutshell, you have some well composed and produced Black Metal that has obviously been labored over. This isn’t your typical basement simpleton shit. Good work guys! More at: www.facebook.com/pages/moonreich/147222865350244, www.lesacteursdelombre.net