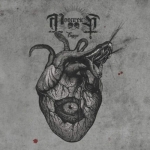 When it comes to Black Metal, France is a country with a wide variety of sounds. And maybe that’s a good thing. Because MOONREICH, though first listens to the band may not strike you as anything pushing the envelope, still create a solid atmosphere of Black Metal that develops into a coruscating aural miasma which is sometimes delicate and other times ferocious. Their fourth album "Fugue" sees the boys (L – vocals, Sinai – guitars, Siegfried – bass and Weddir – guitars and vocals) create an intriguing album three years after "Pillars Of Detest". An echoing guitar permeates the beginning of the album on ‘Fugue, Pt. 1: Every Time She Passes Away’ until the siren-wail of guitars and pulsating drumming kick in. L’s vocals provide an almost Hardcore element breaking through the ether of Black Metal. Mid-tempo ‘Fugue, Pt. 2: Every Time The Earth Slips Away" cascades into breathy vocals and a beautiful guitar melody with plenty of foggy atmosphere until the track breaks free of its reigns and builds and builds, finally ending after a 10-minute epic. ‘With Open Throat For Way Too Long’ shatters the beauty with sweltering velocity and pure aggression. MOONREICH don’t lack for song-title brilliance. The words immediately catch the eye with more than just a generic title other bands tend to come up with. ‘Heart Symbolism’ is more of a rocker, or so it seems, before the song reaches down your throat with abominable force and rips out your fucking spleen. ‘Rarefaction’ is another fuel-drenched beast of a track without giving us a chance to catch our breath. The song rises and falls after a while, licking its wounds before jumping back into battle. Another great song title, ‘Carry That Draught Cause I Have No Arms Anymore’ brings a little more of that Hardcore edge into it while completely maintaining the Black Metal sound enfolding upon itself. The final track ‘The Things Behind The Moon’ saunters over, taps us on the shoulder, and cold-cocks us right in the eye. MOONREICH aren’t a band to write short songs. This track kicks ass in parts, soothes in others, then kicks our door in for good measure. MOONREICH are a confident band, no doubt. They easily run past the humdrum bands who think rewriting their favorite black songs from their favorite bands is acceptable. Sure, their are influences within "Fugue". But the band takes the ingredients and molds them into their own. MOOREICH are a breath of fresh air, when you have a chance to actually come up for air while listening to the new album. For more information, check out www.facebook.com/moonreich, www.lesacteursdelombre.net