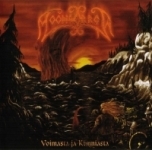 Actually each package by Spinefarm / Spikefarm has yet offered at least one pearl – and so it was this time again. Finnish pagan band MOONSORROW unleash their 3rd effort – if you include their re-recorded demo “Tämä Ikuinen Talvi” on Sagitarrius Prod. – and although I am no longer that much into the pagan stuff like I was years before this was surprisingly fresh for my ears. “Voimasta Ja Kunniasta” which translates as “Of Strength And Honour” is always straight forward but includes all the ingredients that I demand by a Pagan Metal-album: those Nordic melodies, heroic viking choirs, aggressiveness nevertheless a positive mood, authentic instruments like a mouth harp, sword-samples etc. but never forgetting that this is of course a metal-album – all the stuff that makes a pagan album somehow unique. And you will find all this here – done in a decent quality. And even though this somehow lacks originality I consider this far more spiritual than many releases of the same vein. But as I find something negative on every release: who has done those photos? Destroy his camera-equipment and send him naked to the north polar circle! Seldomly I have seen pictures that were as silly as those included in the booklet. Beside this slip – highly recommended. www.moonsorrow.cjb.net