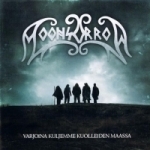 There is a reason why my own record collection includes each and every output of this Finnish act. The explanation is MOONSORROW’s outstanding musical dedication and their breathtaking releases which are the main reasons for their leading role within today’s Pagan Metal scene. For a couple of months the album has been eagerly expected (after over three years of silence since the release of their “Tulimyrsky” EP) and finally by the end of February 2011 the album with the unpronounceable title sees the grey winter light. The concept of the sixth MOONSORROW album is the final stand of a handful of survivors of humanity within the harsh remains of their fallen civilization. The story of “Varjoine Kuljemme Kuolleiden Maassa” – very roughly translated the title means “As shadows we walk in the land of the dead”- is supported by small interludiums which show the fight of the remaining handful of human beings for their mere existence. Musically the band has again improved the interaction of their folk elements with the given Metal surroundings without loosing focus on the extreme creative and musical vastness of their material. The presented four hymns are full of different moods and facets and small details are making these tracks so extremely enjoyable. You can listen to songs like ‘Huuto’ several times and nevertheless you will still find new breathtaking parts within the mainly over 15 minutes tracks. Bands like MOONSORROW are the best proof that Pagan Metal isn’t limited to the funny sing along chants of these days and next to their brothers in mind DRAUGNIM they are currently the best musical export goods of the coldest European Metal nation. For supporting information please check www.moonsorrow.com