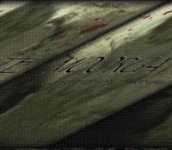 In the info sheet that was sent along with the promo for MOORGATE’s debut album “Close Your Eyes And Fade Away” this Swedish bunch gets compared to melodic Death Metal acts such as AT THE GATES, IN FLAMES and DARK TRANQUILLITY… Pardon? I really wonder if the guy / girl who wrote that really listened to the material they decided to promote here… Ok, just like the aforementioned acts also MOORGATE have a lot of classic MAIDEN overtones in their material (obviously most inspired by the rougher, early days of the Brits), which is perfectly reflected in the gallopping raw riffing and twin guitar attacks throughout the entire record. But that’s about it already! Unlike all the Gothenburg acts, MOORGATE deliver their material in a slightly heavier way, the vocals are more deathly and the bass is refreshingly upfront in the mix. The overall production sounds very “live” and is by no means compareable to all the faceless digital stuff that floods the scene these days. Unfortunately the band also decided to incorparate several clean vocal parts in some of the songs (starting off with track number four, ‘Self Immolation’), which I could easily have lived without. Apart from that it sounds pretty promising all in all, doesn’t it? Well, I personally wouldn’t really play “Close Your Eyes And Fade Away” again nevertheless as the whole record pretty much bored me after a couple of songs already. MAIDEN influenced Death / Thrash Metal simply isn’t my cup of coffee and MOORGATE’s version of it not exactly the most groundbreaking either. For all further info check out www.moorgate.se. The label can be reached at www.cuttingedge-records.com