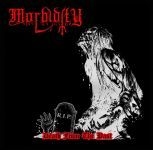 MORBIDITY
Death From The Past
(Iron, Blood And Death Corporation)
62:40min

Very raw sounding Death / Doom is what this obscure Finnish entity deal in or dealt in rather, they were only around for a short period of time back in the early 90s. It sounds very of its time and I immediately warmed to the honesty of their compositions. Excellent catchy melodies which cut through the wall of rough sounding distortion which rumbles and permeates out through the speakers via 3 rehearsal recordings (“Embrace Of Death” rehearsal tape, “Blood Red Dreams” rehearsal tape and “Eternal Rest” rehearsal tape) and a live recording. The songs shift from slow plodding melancholic doomed passages to blast beat propelled parts, but the slow-mid paced doom and gloom is the most prominent element of their sound. These are just basic rehearsal and live recordings too so it all sounds extremely rough and ready, don’t expect anything polished, but it is an interesting trip back in time and a great insight into a very obscure band, who really epitomised the term “underground”. The vocals are of the deep death growling variety, and have similarities to very early PARADISE LOST and the like. Their sound overall leans towards the likes of PARADISE LOST, early CEMETARY (a band who they cover a song by which is featured on this compilation twice via a rehearsal recording and a live recording), early TIAMAT meets the morbidity and gloom filled darkness of early Finnish Death Metal, with early DEMIGOD especially coming to mind when listening to these recordings. One for collectors of obscure deathly gems which have been unearthed from the deepest and darkest depths of the underground scene, it is just a shame they never recorded a studio demo or recording because this material holds so much promise. This band really could have gone places in the Death / Doom scene of that time. Some stand out tracks are ‘Embrace Of Death’ (with its excellent melancholic guitar melody), ‘Blood Red Dreams’ (which is generally a more uptempo affair with some excellent riffs and melodies), ‘The End Of Existence’, ‘Morbidity’ and the CEMETARY cover ‘Adrift In Scarlet Twilight’, which is also very well done. Definitely one for those of you out there who love demo and first album era PARADISE LOST and early DEMIGOD. www.facebook.com/ibdc666