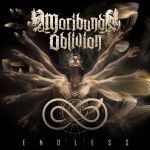 MORIBUND OBLIVION is not a household name in the Black Metal scene. Yet “Endless” is already the seventh album from the Turkish trio that is around since 1999. But all of their previous releases were put out through small labels, thus it is no wonder that MORIBUND OBLIVION remained in the underground. And I don’t think that “Endless” is a game changer for the band. The eight songs of the album are quite nice Black Metal with a lot of melodies. But “nice” in this case means, that “Endless” is a pretty dreary album that misses aggressiveness and power. It seems like I heard nearly everything a dozen times already, there are no barbed hooks or remarkable moments. The only things that really caught me was the fact that the guitar harmonies sound like they were either taken directly from AMON AMARTH or rejected by DISSECTION for being too random. And this didn’t prevent the songs from MORIBUND OBLIVION from passing me by without remaining in memory. After 40 quite boring minutes, “Endless” leaves only a bland aftertaste of randomness, redundancy and wasted time. Counting the bricks of a wall might be more exciting than listening to this album once again. For the band it’s www.facebook.com/moribundobliviontr and for their label, go to www.facebook.com/talheimrecordsgermany