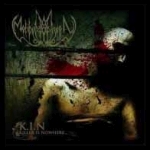 The amount of extreme Metal bands from exotic locations is increasing day by day and the white spots on the Metal globe are in 2009 more than limited. The Heavy Metal ‘disease’ has spread from the Australian desert (STRIBORG) to the Russian woods (NOMANS LAND) but a Turkish Black Metal combo is still in some way special. MORIBUND OBLIVION is – if you believe the general press tenor – the best Turkish Black Metal band and their fourth album is the first which has been released by a German record company to successfully conquer the Metal home country Germany. So what can we expect from “K.I.N.”? The first word which comes into my mind is Sweden – means the band is playing a very traditional Black Metal with reduced keys but without any influences from their own musical background. Nearly all lyrics are in English and I can’t lose the impression that several of the songs would sound quite better with Turkish lyrics – the theory is proved by the song ‘Come Back’ which was recorded additionally in a mother tongue version. ‘Geriye Don’ is the best song of the whole release which not automatically means that “K.I.N.” is a bad release but I’m really missing own ideas – the album is passing by without remarkable new / unique ideas and that’s not enough to survive in the harsh Metal environment with several dozen releases every week. So at the end it’s maybe a little more “Killer Is No/where” than “Killer Is Now/here! www.blockactionmusic.de, www.moribundoblivion.net