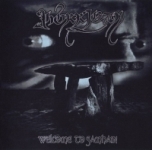 Considering the fact that “Welcome To Samhain” is already MORRIGAN’s fifth full length album, I hope that there’s no longer need to introduce this German two-piece to anyone of you. What impresses me about them for quite some time now is the fact that they have never betrayed their musical roots and constantly kept their quality level very high! Of course their number one reference act will probably always remain classic BATHORY, but as Balor and Beliar deliver their version of it with so much class for several years already I don’t have a problem with that at all. This time around it seems to me that the harsh elements tend to dominate the melodic / dramatic side (usually the band comes up with a pretty balanced mixture), so that “Welcome To Samhain” is the perfect counterpart to their rather epic “Celts” full length (which has just been re-released by Undercover Records as well). Of course there’s a lot of perfectly executed hymnic parts on “Welcome To Samhain” as well again, but the overall feel of the album seems to be a lot more aggressive… and that suits them very well! MORRIGAN has always been a band that easily pleased pure Black Metal and Viking Metal fans alike for their cool mixture of both styles. In that respect I never really understood why they have never been picked up by one of the bigger labels. I mean, they have never changed their attitude, play live whenever there’s a chance to, come up with great releases year after year and have one of the best (Black Metal) vocalists of all time in their ranks! Beliar’s voice is so emotionally grim on one hand, and so hymnic and clean on the other that it constantly sends shivers down my spine. While others just manically scream as extreme as possible, Beliar literally seems to transform into an ancient barbaric warrior, who’s obviously possessed by a sinister demon (just listen to ‘Cranking Battleharps’ and you’ll easily understand what I’m talking about). So, to me there’s once again nothing to complain about, the whole album is just perfect as it is! It’s packaged in the usual dark, yet very tasteful, celtic style (instead of coming up with typical black and white pictures of corpsepainted fellows), offers a rough but solid production and this time surprisingly even features an unreleased MAYHEMIC TRUTH song from 1993 (‘Believe In Eternity’)! So, if you already enjoyed MORRIGAN’s previous outputs in particular or a cool mixture of BATHORY’s “Blood Fire Death” and “Hammerheart” in general, there’s definitely no excuse to miss out on “Welcome To Samhain”! For more info check out www.morrigan.org or www.undercover-records.de.