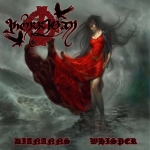 Three years after they broke up, the German Celtic Metal duo MORRIGAN is back with a new long player, the seventh in their history. But I never really was familiar with their stuff, just heard a song or two in the past. So I have to get along with the music on this album. And this music ain’t bad, sometimes it’s even really fine. Imagine a missing link between BATHORY and BATHORY, the very old stuff and the more epic masterpieces, and you got the point. The first two songs ‘The Shadowwanderer’ and ‘Bloodwidow’ could have been songs that were written for classic BATHORY releases like "Hammerheart". On the other hand, ‘Warbitch’ and especially ‘Thy Nasty Reaper’ represent the more Black Metal inspired side of MORRIGAN, even though these two miss a lot of the feeling the first two convey. With the epic, even a little balladic ’13 Steps At Dawn’ the band gets back on the epic course, ‘The Gallic War’ is another song every lover of real Viking Metal should enjoy. The alternation between epic tunes and fast stuff continues in the long run, the title track even keeps the balance between both styles in a pretty nice way. Those epic, Viking Metal styled songs and parts are really fine, but those songs rooted more in traditional Black Metal are sometimes missing the spirit. Yet they keep up the thrill on "Diananns Whisper". In case you dig the epic BATHORY and need more, you won’t be too wrong to check: www.facebook.com/morriganbeliarbalor, www.undercover-records.de