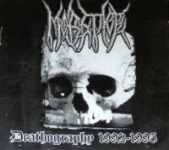 There are a lot of things these days that plague mankind: a global economic crisis, terrorism from left, right, North and South, all kinds of catastrophes, staggering oil prices and all that crap you can see on the daily news. It’s dark times…, also for us Metalheads as we face such existential conflicts as struggling to understand the new MORBID ANGEL, wondering if “St. Anger” is worse than “Lulu” or vice versa, asking ourselves why every mediocre album needs to be “back on black” and why every band that recorded some demos back in the 90s deserves to be reissued in a luxurious compilation. Usually, I am actually a big supporter of such releases as they allow me to discover all these hidden gems like ETERNAL DARKNESS, the fabulous MORTA SKULD demos, DR. SHRINKER and so on and so forth. However, in case of UK Death Metal act MORSTICE, who were founded some time in ’91 and now are honoured by a comprehensive “Deathography 1992 – 95” a slight feeling of redundancy slips into my mind. For utter lunatics and people interested in digging out even the smallest jewel recorded in that era, picking up this release is, of course, totally fine, but the band’s surprisingly American sounding, chugging, heavy Death Metal that also offers a couple of more melodic riffs to generate a proper dark atmosphere is far from outstanding. Especially the last of the three demo recordings “Invoking The Storms” featured on this platter is rather disappointing as it ventures to much into a Black / Death region with its primarily snarling vocals. The latter creates a certain discrepancy to the overall solid quality of the other two demos “As My Suffering Grows” and “Reflections Remain” with their deep growls, nice tempo variations and doomy groove. Unfortunately, the sound was not substantially improved via remastering and comes across rather dull and unspectacular, too, thus I can only recommend this to people who are total UK Death Metal maniacs or the real raiders of the lost gem out there, personally I already have more than enough shiny diamonds in my treasure chest. www.facebook.com/pages/MORSTICE-UK-DEATH-METAL/106593016040654; www.compilationofdeath.cl