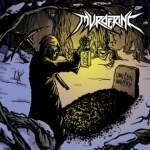 Bygone are the days of spirited and flesh slashing Thrash Metal. In recent times, most modern Thrash Metal releases sound overproduced and yield nothing but thoughtless aggression. Nevertheless, the rampant spirit carries on and always transcends unto the souls of anarchists. In the modern era, bands like DEATHHAMMER, NEKROMANTHEON, FASTKILL and few others wholeheartedly carrying the sonic legacy of nefarious and bulldogging thrashing madness which was spawned by the elder ones SODOM, KREATOR, DESTRUCTION, ATTOMICA, MORBID SAINT and DARK ANGEL. While always seeking for inventive thrashing acts with flaming souls, it has been an utmost bliss to be exposed unto MURDER INC. The Thrashers of Beroun, originated in 2011 and since then spitting lava fire into the center of earth’s crust. Noticing that maelstrom, Czech Thrash / Death label Support Underground rightfully took MURDER INC. under their wing. In cooperation with Support Underground, at first they released their EP “Permission To Kill” and finally their debut album “Umlčen Navěky”. This debut album precedes “Split Demo 2014”, the independently released EP “It’s Time To Die” in the same year, and the EP “Permission To Kill” in 2016. After reuniting from few personal changes they were performing thrashing rituals altogether steadily for the past few years. It is bewildering to mention that, during the time of the creation of MURDER INC., their drummer was only 11 years old and enthroned to produce filthy percussive gunfire. Initiating with an uncanny wolves screech “Umlčen Navěky” will purely shudders, wounds and pulls you into the maelstrom where ten razor blade punishing songs in a loop will give you a sharp reminder that this record beholds the forbidding spirit of great olden times and has the purely engulfing inherent energy which can incinerate the core. Flying denim jackets, bullet belts and neck bursting insanity reminiscent of the rebellious glorious days will appear subconsciously and transform yourself like a warrior as you move on. Amusingly, the lyrics of the whole album are written in their native language but somehow the maniacs spat this out with sufficient rawness and venom for one to feel the essence of it. By seeking help from a translator and little exploration, a well thought out and wise perception behind became unfolded. The first instrumental comes up with an interesting title ‘42-06-10’, a symbolic date addressing the mass extermination of the people of Lidice, known as Lidice massacre during German occupation of Czechoslovakia. Bearing the similarly, the name of the second song is ‘Judgment Fell’. The lyrical views of the other songs chronologically build up the total picture which will lead you to reflect not only on the past of human civilization but also concerns about present civilization, possible existence of extraterrestrial entities, fabricated ideals, made up paranoia and anxiety, biased and corrupted power of the media, and its collective consequences. All the compositions have well varied text ranges amplified by merciless riffing, stimulating solos aided by high-speed canon fire percussion’s like a rolling sledgehammer. Aptly mixed and mastered at Otyn / Davos Records, which kept the menacing old fire burning throughout the production and also uncanny artistry by Boris Bauer complement the atmosphere it’s behold. Grab this release, turn on your loudspeakers, let yourself be murdered by this ripping and no-fucks-given creation. This record is an excellent addition to any playlist that involves venomous and rebellious thrashing, which is very well executed and gave a great nod to the grand old time. Considering the youth of the musicians, only more lethal outbreaks can be expected in the future. Check out the band here: www.facebook.com/rawthrash666 and their label here: www.supug.cz. Or visit their Bandcamp page: https://murderinc.bandcamp.com.