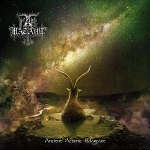 Mr. Stöver gave me that album and mentioned that this surely would please me 110%. Hell-yeah, Frank, that is 120% correct. NAR MATTARU is an awesome band and delivers exactly that kind of Death Metal I prefer. I absolutely love all the stuff these Chilean warriors of unholy and occult darkness released so far, and so I eagerly waited for this second full-length. Now I, Voidhanger Records unleashed this crushing and devastating masterpiece of gloomy and unholy Death Metal upon us. Damned, this is good… this is really, really good. I especially like those colossal hypnotizing riffs and those morbid guitar leads. “Ancient Atomic Warfare” is mostly mid paced and slow (in this case slow doesn’t mean Doom), but there are also some fierce blasting eruptions. The tempo variations increase the heaviness and help to make this a truly interesting album with an utterly morbid and eerie atmosphere. The vocalist must be a creature from the deepest pits of hell and that demon’s voice sounds like there’s repulsive slime running down his throat while he is spewing out those unholy incantations. The production is very thick and massive and sounds like that album would have been recorded in an ancient dungeon by a possessed magus. This is truly a hell of an impressive and fuckin’ heavy Death Metal monument. Fans of CRUCIAMENTUM, DOMINUS XUL, DEAD CONGREGATION or GRAVE MIASMA definitely will not regret checking “Ancient Atomic Warfare” out. I promise! And now I’ll go down on my knees, bow my head towards Chile and will listen to NAR MATTARU for the rest of my unworthy life… and to PRAISE THE FLAME, UNAUSSPRECHLICHEN KULTEN, DEMONIC RAGE, ATOMIC AGGRESSOR, DOMINUS XUL, TRIMEGISTO, MELEKTAUS, PENTAGRAM, MAGNANIMVS and, and, and… Aaaarrrgggghhhh, Hail Chilean Metal Of Death!!! www.facebook.com/nar.mattaru.1, www.i-voidhanger.com