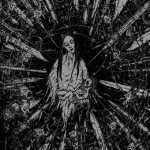 The band name NEBELWERFER literally means smoke mortar. This term describes a weapon that was initially developed to fire smoke grenades for the purpose to take the enemies sight. But during World War II the German army at the Eastern Front get to know the (in)famous Red Army rocket launcher "Katjuscha" (also known under the name "Stalinorgel") and its devastating impact. From that point on the German smoke mortars were modified to fire rockets as well. So the term “Nebelwerfer” became synonym for the German rocket artillery. From that point of view definitely a fitting name for this Russian four-piece. The songs make no prisoners and leave the listener quite devastated. If you ever listened to “Panzerdivison Marduk” you know this effect. Fortunately the band did manage to recruit a human drummer, so no tinny drum machine sound annoys the listener like on the debut “The Spirit Of Violation”. Unfortunately the drummer did choose the German word “Neuntoter” as his pseudonym / nom de guerre. It may sound pretty evil and atrocious, but it is just the name for some kind of little and sweet birds (scientific name: Lanius collurio). But let us take a look at the music, leaving such useless facts aside. Besides the above mentioned MARDUK also bands like DARK FUNERAL or SETHERIAL can be used to describe NEBELWERFER. Absolutely straight in your face Black Metal, tight as hell. I guess the band spent a lot of time in the rehearsal room, the sound can easily compete with West European standard. And at its best moments, when the pace is slowed down to mid-tempo (for e.g. ‘Rape’ or ‘The Great Planet Killer’), this output offers some crushing Death Metal riffs, a name like BELPHEGOR may appear in your mind. This impressive and striking output is refined by a cover version of ‘Goatcraft Torment’ by URGEHAL. Presumably “The Aeon Of Filth” is also available via digital download, but in that case you miss the well done digipak artwork with a 20 pages booklet. www.assault-crew.net