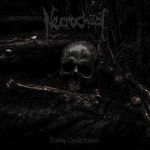 Eugene Kohl / Tsorn / Gnev must be the king of one man bands, as he has quite a lot of bands under his belt, where he is handling everything himself. I don’t recall having used a lot of time listening to any of them, when I scroll through the list, though that might change now, when I have laid ears upon his newest abomination NECROCHAOS! Dark and grim Death Metal midpaced to sloooow doomish parts, grimey and raw as it should be. There is some great riffing, great ambient distortion on the downtuned riffing, smashing rhythm patterns and a low guttural growl, that will make Craig Pillard proud. A great offering of old school grim and gnarly Death Metal, with passion and intensity. This could have been a forgotten recording from the mid-nineties, which I find quite charming. There is nothing new under the sun on “Crawling Through Cadavers” though the music is delivered powerful! The recording was released digitally late 2019 by NECROCHAOS as a three track demo, though this newly released version from Godz Ov War Productions contains five decayed tunes of death and destruction. This band will be exciting to follow into the future. Behold the nocturnal dominium: www.facebook.com/necrochaos.official, www.godzovwar.com