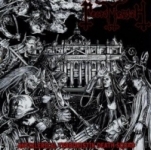 What would you expect from a band claiming to be influenced by such legends as VENOM, SODOM, CARPHATIAN FOREST, IMPALED NAZARENE, CELTIC FROST / HELLHAMMER, MOTÖRHEAD and the likes? Pure mayhem? Fuck yeah! These shitheads have been around for over 5 years spreading their fucked up Black / Thrash all over their native Italy, with several releases under their belts and ready to take over the world with this their newest best-wishes present for the Vatican worthless scum properly titled “Antiklerical Terroristik Death Squad”. They storm mercilessly through the 10 blasphemies with an admirable respect for the old school Metal underground and I can assure that this will put a big fat smile on any 80s headbanger. Obviously, this is not the most innovative thing ever released but at this point who cares about originality when most of the new stuff being released sucks big time! In order to enjoy this album from beginning to end it is required that you steal from the nearest supermaket a 6 pack of your favorite beer (non-alcohol is for pussies!), a cigarette pack (even if you don’t smoke!), a nice big-boobs-bitch (highest score if she is your best friend’s girlfriend!) and be prepared to headbang until your head drops down to the floor! Contact them at: necromessiah.altervista.org/.