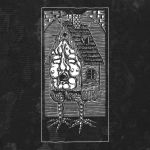 “Asbest” is Austrian Death Metal band’s NEKRODEUS sophomore album. Previously they have released a demo, an EP, a 4-way split with other three Austrian bands and their debut album “Moloch”. The band started back in 2013 with ex-members of the bands ZODIAC and BLASPHEMIST. I haven’t heard any of these bands to be honest, so I cannot comment if there are any differences from their previous bands or if they have followed a similar path when it comes down to musical influences and sound. Well, back in the day, I remember listening to three Austrian bands (yeah, I suppose you know which bands I am talking about). But evidently, things have changed since then and NEKRODEUS is the perfect example of how Austrian Death Metal has evolved. I would describe their style as a fast form of Death Metal; lots of blast beats and tremolo riffs mixed with huge open chords and dense slower parts. They even throw some D-Beat and Punk / Hardcore bits in there. Which makes these 40 minutes one hell of a listen. Michael’s furious guitar riffing is closely followed by Sebastian’s pounding bass lines. I may say that I dig the bass tone. It is thick and distorted, yet it tightens up the bottom end of the album nicely. Paul’s drumwork is amazingly precise and solid, with a nice use of constant double bass, hi hat and varied drum fills. Stefan’s vocals are the icing on the cake, going from deep growling to frantic screaming. Musically, NEKRODEUS has a clear idea of what their sound should be. These guys know their way around their instruments very well since every performance is sharp, yet organic. The songs have a really nice flow as the album plays which include some atmospheric segments and even a bit of Black Metal – like parts that add a lot to the listening experience. Finally, the production is top notch, with a clear mix. The guitar and bass tones are menacing and the drums sound humongous. The vocals are a little pushed back, but the constant variation in the vocal department fits really well into their style. I would’ve liked some more dynamics in the mastering just to differentiate some parts here and there, but overall this is one solid Death Metal album with a bunch of interesting influences. You can contact the band here: www.facebook.com/nekrodeus. And you can get this album from their label here: www.facebook.com/grazilrecords