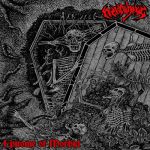 NEKROHOWL came into existence after some fanatic forces decided to commune and their debut self-titled demo asserts that intent. Hatched from the savage street sides of capital (Das Poisonous Kapital) city Dhaka, the smell of disgust and robustness of that demo also tells the tale of the surrounding atmosphere. Released independently around 2016, the debut demo had 3 originals and one SUFFOCATION cover ‘Infecting The Crypts’ (a skull rapturing tribute!), lengthening just little over 15 minutes. No doubt, an enticing length for a demo. And, so is the atmosphere, which is raw and vicious. The demo made some roars which later turned into rumble, when their drummer Pounder (a beastly force of his own) departed and Mephistopheles Warmonger (ex – CHROMATIC MASSACRE, JAHILIYYAH, ORATOR, WARHOUND) took the dominion on drums. The band then went on to record their EP “Epitome Of Morbid” and released it in the classic gory style of the early days, that reeks of horror and uncanniness. The front man among the trio, Obliterator (SATANIK, HOMICIDE, KHNVM), also on guitar, beholds the roar in the throat of NEKROHOWL. It’s a rasped and coarse howling of a wolf. He certainly spits out some varied growls like a possessed one in songs like ‘Blasphemy Still Unnamed’, ‘Epitome Of Morbid’ and ‘Worship Thy Malevolence’. And with each listen they swirled into some bewildering beings, carried by bass movements full of thundering discharges. The feral tonality, awe-inspiring slides and viscous bend works by the Sadist (ORATOR, ex – HOMICIDE, ENMACHINED, BURIAL DUST, NAFARMAAN) certainly have weaponized these compositions and reminds of the influence from the schools of Steve DiGiorgio, Dan Lilker, Ross Dolan and Derek Boyer. Sadist, surely lived and breathed Metal and welds that all over the EP, like an uncompromising force and you won’t be able not to be possessed by that. The overall influences logically come from both traditional schools of Europe and America – which means spine-chilling, uncanny melodies with heavy riffs and piercing grooves. The violent chops by Warmonger often breaks out the time signatures and is surely delivered like a punisher who thrived to attack his drums, sometimes in a rattling cymbal solo, sometimes storming around the skins. Almost like a precise battery, rich in blasts and craftsmanship. No wonder, his addition lifted NEKROHOWL to other horrid magnitudes and provides another reason why Mephistopheles Warmonger is always hailed as one of the fiercest and finest among the alluring South Asian underground. The record beholds a very analogue sounding production and that added engrossing depth and churning madness to the overall atmosphere. With all these, the EP reeks of classism through its evoking cover art (Grasen Artstyle) and altogether embodies a record of pure Death Metal atrocity, made to enlighten desolate paths and invite forlorn spirits. “Epitome Of Morbid” certainly gave NEKROHOWL a solid footing in the murky depths of Death Metal and exposed ones will surely await with anticipation for their upcoming endeavors. Explore more about the band at www.facebook.com/nekrohowl and https://nekrosadist.bandcamp.com. Label contact: www.facebook.com/slaughterhouserex