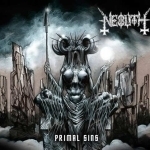 I must confess this band wasn’t on my radar yet! NEOLITH is a Polish old school Death Metal act that is already active since the early 90s. While their late productions are more in the Black / Death style, their earliest work is more oriented to Death / Doom territories. In fact, they’re contemporaries to bands like PARADISE LOST, MY DYING BRIDE, ANATHEMA, TIAMAT, KATATONIA, to name a few. “Primal Sins”, a 2 CD digipak compilation, was released last year by Russia’s GS Productions (as usual with these kind of GS Productions releases limited to 100 copies – Frank) and it contains the band’s first three demos. The first CD contains their very first demo “Death Comes Slow” (1993). Well, in general NEOLITH offer here some average uninspired music: no atmosphere, no darkness. The production is acceptable for a demo tape. The second CD contains the “Journeys Inside The Maze Of Time” demo 1995 and “Promo 96” tape. The compositions in “Journeys…” are better developed, including some really good keys here and there, but again, something is missing. It’s not about the production, that is not bad, or atmosphere, but the music is far from memorable or interesting. The stuff here is really plain. The “Promo 96” offers no different elements. Here is no evolution or new ideas. Monotonous rhythms on drums, silly keys, good ideas poorly executed, unnecessary elements from time to time (feminine vocals, flutes, etc.) and the list goes on. Maybe I’m wrong because of my tendency to assess this stuff on a current view about Doom / Death, avoiding to place myself into the context this was created. If you want some great Eastern Europe Doom / Death acts from the same period, then try DISSOLVING OF PRODIGY, STONEHENGE (Russia), early GALLILEOUS, CUMDEO, PAINFUL MEMORIES, ETERNAL DEFORMITY early demos, etc. Good tracks: ‘This Is My Kingdom’, ‘Left Alone’. Follow the band at www.facebook.com/neolith, get this release at www.gsp-music.com