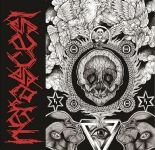 NERASCESI is an Italian band, formed in 2015. Their members already have some experience in Death / Grind bands and they wanted to do a band which can also add their Black Metal influences to that, thus the band is born. Now we have their debut album which is rooted firmly in the Death Metal realm most of the time, but there are quite more than a few Black Metal touches here and there. Their Death Metal sounds to me closer to bands like ZYKLON and BEHEMOTH with other influences ranging from early MAYHEM to IMMOLATION. The production is very good, and I especially like the drum sound, where everything can be heard. They have a fat guitar sound giving that asphyxiating atmosphere, like those demos from the early 90s. I can feel that essence a lot in the track ‘Mnemosyne’ which could easily be a track out of “Dawn Of Possession”. Vocal wise they are wise to use variety in the formula fatal to the flesh. Something that I usually find in Italian bands is the great use of bass and here it’s no exception. And to add that special touch they evoke the devil in their native Italian tongue which adds more evil to the devil itself. This gives a touch of evil and nostalgia to Death Metal in these pandemic apocalyptic times. And that is only a good thing. www.facebook.com/nerascesi, www.facebook.com/ibdc666