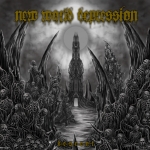 The band name for Germany’s NEW WORLD DEPRESSION is a little misleading. Instead of a melancholic, downbeat array of songs, the band plays upbeat Death Metal in a similar vein as ENTRAILS. But if Metal fans don’t attempt to categorize the band from their name alone, their fourth studio album “Descent” should please most audiences. The sound of rain and thunder, along with a bell from the nearest tower open up ‘Ceremony Of Delusion’ which quickly escalates into fantastic riffs interchanging between pounding drums and raspy vocals. ‘Scoff Till Death’ chugs and gurgles with a steady flow of Death’n’Roll that kicks ass in ways other bands could only dream of. The thudding, waspy bass at the beginning of ‘Working With Flesh’ charges the band until they erupt into some old school guitar sounds and pulverizing drums. ‘Panzer’ opens with vocalist Hutte growling “Dead for eternityyyyy!”, which is fitting as his voice sounds like a gathering of husks of dead bodies trodding their corpses across the murky swamps. ‘Nasha’ is chanted repeatedly until the machine-gun fire of guitars and drums rip through our eardrums that are unfathomly aggressive, and lead to headbanging so violently we’ll all regret it in the morning. ‘Descent To Hell’ swarms like a chaotic mesh of hornets as ‘Pervetin’ sounds like JUDAS PRIEST decided to become a Death Metal band. ‘Ritual’ will get the audience thrusting their fists in the air in synchonicity as ‘Devil’s Slavery’ rivets its monstrous drill into the brains of monolithic putridities. And to end this consistently energetic album is ‘Hate.Kill.Repeat’, a swaggering tune at first which immediately goes full-throttle into sonic speed before calming back down in the middle, then bringing a finality with blistering riffs. “Descent” is the Death Metal album we all need. From beginning to end, it never lets up with its intensity. Here’s a band that’s about business, holds no hostages and kicks the door in with their steel-toed boots to bludgeon whoever’s inside. For more NEW WORLD DEPRESSION info, check out www.facebook.com/newworlddepression, https://fuckingkillrecords.bandcamp.com