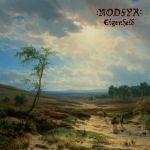 In spite of having been formed a decade ago, this is the debut album of the Dutch Pagan Metal band :NODFYR:, who have been sparse in releases. And a fine album it is, evocative of an ancient idyllic past, as also their cover artwork which depicts a landscape unspoiled by progress and technology. I particularly enjoy the fact that even though their songs are not convoluted at all, they are very well composed; you can hear the bare instruments, guitar, bass and drums mingling with the keyboards to magnificent effect. Even though they have occasional but rare moments of speed, for the most their music is mid-paced to slow, akin to, say, classic era CANDLEMASS (listen to ‘Wording’, for example). Such music has very much to live off the strength of the compositions, and they succeed in creating captivating songs with this direct approach. There are rare inclusions of a female vocalist and some moments are far more “folkish” than the rest, namely some parts of the closing song ‘Nagedachtenis’ (a very impressive track) and the instrumental ‘Driekusman’, which begins with an accordion and lute intro and then a fiddle throughout the song (I wonder whether it’s keyboard-made but it sounds fine). A definite strong point is the vocalist, with a resonant, powerful voice which sounds perfect here. Occasionally he rises to an amazing epic bellow (such as in ‘Mijn Oude Volk’) that I hope he may further explore in the future. If you are one to appreciate tunes full of nostalgic ambiance for a distant past and distinct musical quality, I advise you to give this a try at www.facebook.com/nodfyr, www.van-records.com