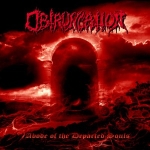 The name OBTRUNCATION had always caused a certain excitement. Before ever having heard a single song some praising reviews and ads mentioning ultra fast drumming and extreme growling vocals created an almost religious conviction that this band simply had to be awesome. After first acquaintance thanks to two tracks on the DFSA compilation, all expectations were met and the demos were in possession shortly after. Especially the second ”Sphere Of The Rotting” from 1992 kicked some ass! A few years later their debut album ”Callous Concept” was released in 1997 (being recorded a few years earlier) and as far as I know, this one didn’t get such raving reviews as the demos. Maybe the timing was unfortunate with the Black Metal hype going on. After this it became very quiet with the departure of vocalist Lawrence Payne and several changes in the line-up that took place before they became stable and productive. Besides some gigs, OBTRUNCATION stayed pretty much off the radar until now (2015), with the release of ”Abode Of The Departed Souls” on the also Dutch label Vic Records. And guess what? These gigs have produced a well-oiled machine and the many setbacks seem to have given the band unbounded energy. Drummer Martin Steigenga seems immune for bodily detoriation with the passing of time. In fact, his playing has evolved in technique and tightness. Guitarists Luc van Ravels and Bruno Bakker deliver a thrashy riffmania that reminded of the first demo. Soms arrangements had some CANNIBAL CORPSE / SINISTER class. Vocalist Anton Visser sounds not as monstrous as Lawrence but also convinces with his own brutal style. The tracks have head and tail and despite the many blasts don’t drown in hyperspeed overkill. They’re distinguishable because of sufficient variation with constant factor being energetic, tight and fast. All these elements together make ”Abode Of The Departed Souls” a nutricious four star meal for fans of MYRKSKOG, SADISTIK EXEKUTION (pre ”K.A.O.S.”), HATE ETERNAL, LOST SOUL, VOMITORY, above mentioned bands and the likes. Besides this, it’s a welcome release for the Dutch underground and an essential awakening for OBTRUNCATION. Real flaws I couldn’t find, except maybe the production of the bass which seemed to be forgotten. The snare can hardly be separated from the kickdrum during blasts. Nothing really annoying and this doesn’t take away that tracks like ’The Wild Chase’, ’Winged Death Upon Earthly Life’ are strong additions to favorites like ’Mutual Hatred’, ’Aroused By The Deceased’ and ’Pernicious Saviour’. For all further OBTRUNCATION information check out www.obtruncation.com, www.facebook.com/obtruncation, www.vicrecords.com