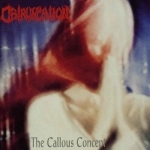 Five years after the last demo OBTRUNCATION released their debut. Obviously the guys from the Netherlands tried not to sound like a plain standard Death Metal band, but they failed. The albums is burdened by good intentions, leaving the listener more than once dazzled and confused. "The Callous Concept" starts with blast beating Death Metal on the edge of Grindcore, but already during the second track ‘Mutual Hatred’ things are getting weird. Murmuring Chants? What the hell? Okay, that is only for that one song. During the further playing time there are lots of different influences, namely Florida inspired Death Metal (DEATH), technical Death Metal (CYNIC, ATHEIST), sometimes the songs completely tip over to Grindcore (BRUTAL TRUTH, early CARCASS). Sorry, that is just too much for me. A little bit strange, because if you take each song for its own it is definitely a good worked piece of Death Metal and precisely played. But considering this album at large it lacks of a clear line. As bonus two live tracks from 1994 are added, thankfully with a better sound compared to the bonus track of the demo re-release. "The Callous Concept" re-issue is fully remastered by Tom Palms from PHLEBOTOMIZED and features an interview with the band, extensive liner notes and rare pics. www.facebook.com/obtruncation, www.vicrecords.com