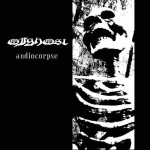 Sami is back with his one man extreme Metal act OFGHOST, to continue giving life to his ‘hobby band’ by using his uncompromising DIY-method to get things done. "Audiocorpse" is the first 11-track fruit out of Sami’s new low budget studio, in which he seems to be improving and moving forward as a composer of music as well as a producer of his own stuff. A disturbing and yet even experimental mishmash of Death Metal, Grindcore and Black Metal, with some distorted sample effects mixed in for good measure, is what Sami has created all by himself on "Audiocorpse", using a wide range of different influences in his songs that have influenced him over his 30 years life as a music fan. What is to be noticed almost right away, compared to Sami’s previous releases with this project, the songs sound a bit more coherent this time, plus the production has drastically being bettered too although Sami still considers the production on "Audiocorpse" as ‘anti-professional’, as he wants to put it himself. Musically it’s hard to put OFGHOST in a certain category because it’s a sum of many influences really. Heavily distorted, experimental Metal with twists of Death Metal, Grindcore and Black Metal, it’s got all that plus a little bit more even as was mentioned earlier. There’s a few interesting moments going on here and there within this release, but then again I think the wholeness would have worked way better if Sami had cut the length of this release down to approx. 30-35 minutes only. Now when there’s over 50 minutes of stuff squeezed into the disc, it’s certainly a bit too much to swallow at one session because the music itself herein has reached such disturbing and extreme ends. With little doses OFGHOST, works definitely best in my opinion. And you know what? It’s YOUR turn to be the judge next for OFGHOST. To find more about Sami’s OFGHOST, here’s a channel for doing so: www.facebook.com/ofghost