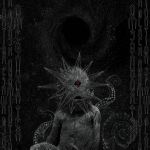 OMEGAVORTEX just ruined it. Of course not their debut album, but my Top Ten list for 2020. All was said and done, but “Black Abomination Spawn” is such a brutal and merciless piece of Death Metal I have not heard for a long time. Exactly since the latest TEITANBLOOD album, to be more correct. Originally formed as AMBEVILENCE in 2007 and from 2017 on under the current moniker the band from Germany spews poison and bile. Savage and wild all throughout the whole playing time, making no prisoners. Names like TRIUMVIR FOUL, GRAVE MIASMA plus the mentioned Spanish barbarians TEITANBLOOD may give you a little outlook of what to expect. But OMEGAVORTEX are taking things a step further. The more I listened to this album the more I noticed a huge influence by the early works of Finnish brute Balk Metal vandals BELIAL (“Wisdom Of Darkness” and “Never Again”). Breathless, fast-forward swirling chaos unfolds during the quarter of an hour, the guitarist plays his fingers bloody, fierce and untamed vocals and the drums are nothing but a vicious outburst. With that spiked radiant figure on the cover, which looks like the corona virus bastard, this is the perfect release for 2020. Maybe pure coincidence, but it fits like a glove. Song titles like ‘Void Possessor’ and ‘Cosmic Horror Maelstrom’ (notice the tentacles on the cover!) and a sound which oscillates between disharmony and monolithic magnitude are the icing on the cake, so to say. Enter the realm of chaos here www.facebook.com/omegavortexblackdeath or here www.facebook.com/invictusproductions