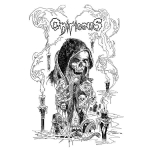 From a small town, more or less in the middle of Spain, a tad South-East of Madrid, hails ONIRICOUS which released this album on CD on Razorback Records in 2013. The time has now come for a LP release by the fellow Spanish label Equinox Discos, a thing that I find great, as the album is quite good and deserves some more noise, as it seems like it drowned a bit, when it initially was released, and that is not fair to the quality of the Death Metal, these guys churn out! If you know the style of Razorback Records, you know you are in for a rollercoaster ride of maggot infested grinding Death Metal, and that is for sure what we get here. Chainsaw riffing, wicked rhythmfigures and a reverbed growl from beyond. The adventure is inspired by the great Lovecraftian tales, and some of the darkness and mysticism of those have been transfered into the music. The guitar riffing adds a lot to the dark and eerie atmosphere, together with the well varied growls, and the few times synth is used, it also works really well. A great debut by these guys, mysterious, dark, raw and to the point Death Metal intertwined in wicked songwriting. Wrapped in a great raw, though good production. It is mixed and mastered in Sweden by the good Dan Swanö in Unisound, after being recorded in Moontower Studios in Barcelona, where the who is who of the Spanish Metal scene have been through, in some way or another, during recording, mixing or mastering. The sound has turned out quite Swedish, and that is fitting for this attack from ONIRICOUS, and it is great to see it unleased on vinyl now! Until we wait for new material, dig further into the band here: www.facebook.com/oniricousband, www.facebook.com/eqnxdiscos