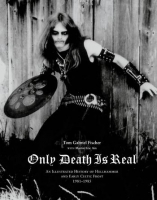 ONLY DEATH IS REAL - An Illustrated History Of Hellhammer And Early Celtic Frost 1981 - 1985
Book
(292 pages, Hardcover, written in English)

Too bad that we already have a movie entitled “The Story Of ANVIL”, cause this book here is without a doubt as equally exciting, if not more…! And you don’t necessarily have to be a fan of HELLHAMMER or CELTIC FROST to fully appreciate it (even though it probably is a lot more thrilling then). “Only Death Is Real” finally reveals (almost) every little detail about the origin of Switzerland’s heaviest and most obscure musical export, HELLHAMMER, and the early days of the band’s successor, CELTIC FROST. But be forewarned: if the entire HELLHAMMER phenomenon and mystical aura that surrounded them was helpful for you to enjoy their music even more, you might be surprised how serious Tom’s statements actually always were when he said that HELLHAMMER basically just consisted of immature kids that didn’t know how to handle their instruments properly… The story of “Only Death Is Real” kicks off with Tom’s difficult childhood, how he got into heavier music and how he quickly discovered the NWOBHM. Particularly the ‘In League With Satan’ / ‘Live Like An Angel (Die Like The Devil)’ 7″ single by a British band called VENOM caught his attention, due to the band’s heaviness and extreme visual image. As you all know, usually 7″ vinyl singles get played at 45rpm, but Tom found a way to turn VENOM into an even heavier unit by playing the 7″ on 33rpm and more or less built the foundation of HELLHAMMER on that. From now on you get to read about how consequently he lived his dream over the years, why certain members came and went and how difficult it was at the time to be in a band in a small town in Switzerland, that wanted to play nothing but the heaviest music around (remember that all this took place way before Death, Thrash and Black Metal existed). What I really like about the book is the fact that Tom additionally managed to get several statements from his old bandmates and incorporated them into his own story, to make it even more in-depth, while Martin Ain contributes a lot of details later on as well. The origin of the HELLHAMMER songs and the recordings of their demos and EP have been described in such a fascinating way, that you almost think you were part of the band’s circle of friends at the time. Unfortunately the story in the book ends when Reed St.Mark joins CELTIC FROST on drums, but of course you can easily find out more details about what was about to follow, by picking up a copy of Tom’s other exciting book “Are You Morbid – Into The Pandemonium Of Celtic Frost”. Visually “Only Death Is Real” is a lot more impressing though. The fullsize, hardcover edition is heavy as fuck (it was a real challenge to read parts of it in bed, believe me), features a shitload of pictures (I haven’t seen most of them before!) and lots of rough artwork drafts, finished artwork, logo designs, demo covers, news flyers etc. etc. So, this is truly a must have for every member of the Necromaniac Union and beyond, believe me – and all in all definitely one of the finest books in Metal together with Daniel Ekeroth’s “Swedish Death Metal” and Jon Kristiansen’s “Metalion – The Slayer Mag Diaries”!