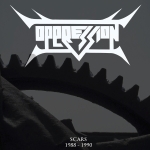 Dave Rotten has once again dug deep to find some obscure old bands, that never were around long enough to make some real noise and a real legacy, even though they delivered some great music. Though with no full length release on a bigger label, to back up the band, it is easy to become forgotten, besides from the few freaks around remembering good old music, and promoting it. OPPRESSION is such a band, they were around from 1987 to 1992 and released 3 demos, perhaps 4 (one in 1988?) and a 7″ EP, before they split up and Lars Nieminen, the guitarist in OPPRESSION became occupied with CORPORAL PUNISHMENT, who did a couple of good albums, before he had a stint in GLOOMY GRIM. Though let us get back to OPPRESSION, Xtreem Music has collected the old demo tracks and the EP and made this sweet compilation, with the obscure brand of Thrash the Fins delivered back in the days. It seems like the band never really found their style, as they are moving a bit back and forth from technical Euro Thrash with a haunting dark atmosphere, to a more upspeed US version here and there, especially the guitarwork on the song ‘Oppression’ has clear and good marks of SLAYER, a song which must be from an early demo predating the officially demos listed around the interwebs. The band also have a great tendency of making quite long songs, which might have been a factor for noone signing them back in the days, but something that would have made OPPRESSION quite attractive today, as they make their songs with progression and punch, quite good songwriting and performance from the band. I hadn’t heard of this band before I had to review this release, and quite a surprise I was up for, as the Fin’s dark, technical, pace-changing Thrash feast surprised me quite a lot, it is insane how many good bands that were around back in the days, that never got signed and a chance to show their music to the world. Though awesome that there are people trawling through their old demos once in a while, finding something interesting, getting in touch with the band, digging up the olden treasures and getting permission to release it upon mankind a good 25 years later! More info at www.facebook.com/oppressionfinland, www.xtreemmusic.com