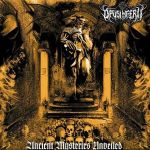 OPUS INFERII is a Brazilian band formed back in 2003, and this is their debut album originally released back in 2012. What we have here is fast, melodic Black Netal which is quite similar in style to early DARK FUNERAL. There are also touches of Black Metal from early DARKTHRONE and more than once some riffs have that DISSECTION vibe. The production is quite good, with strong and present guitars, and the musical execution is also very good. Yet, if you have been listening to extreme music the last few years, you will hear things that seems to have been already done. But, comparing this to let’s say the latest DARK FUNERAL, I will choose this south American horde any day over the Swedish ones. Probably my only minor complaint will be that the drums could have a better sound and the vocals could also use some more variety. But for what it is, it’s more than an average Black Metal band, and if you like the works of bands that are invoking the evil one, whilst injecting few doses of evil Death Metal, then this is worth checking out. www.facebook.com/opusinferiihorde, www.vacula.com.ua