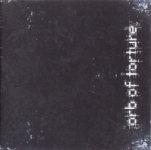 In June 2002 members of the Belgian acts SEVENTH SEED and BROKEN NECK officially started a new brutal unity, that they named ORB OF TORTURE and that guitar players Marlon and Tristan already had written and recorded songs for since early 2001. Even though all five members have different musical influences, their common goal was to come up with something technical, yet very brutal in the vein of SUFFOCATION, GORGASM and the likes. Well, judging them just by the material I’ve heard so far, they are definitely on the right way already! There’s only two tracks (as well as an intro and outro) on this demo CD (‘End Of The Arcane’ and ‘Uncivilized Beauty’), but both of them are rather long and complex, offering a lot of variation in terms of tempo changes, moods and brutality. Considering the fact that they were recorded at the band’s rehearsal place, the sound quality still turned out pretty decent. As I was very impressed by their contribution to the second “Face Your Underground” compilation (‘Frozen Hell Design’), maybe my expectations in this release here were a little bit too high. But hey, you gotta remember that the compilation track came up with a crushing studio quality recording and (as far as I know) was written and recorded about a year after these songs here. So, this is basically the foundation of what was yet to come and in that respect, still very impressive. Like I already mentioned earlier, the ORB OF TORTURE guys play a very brutal form of US style Death Metal, but with a lot of unique elements and technical skills to stand out of the masses and I bet my ass that a record deal is only a matter of time for them. You can order this disc (which comes in total black, with a very futuristic looking cover design) for 5,- € (plus 2,- € to cover the postage costs) from the following address: Jense Philips, Lange Delle 28, 1970 Wezembeek-Oppem, Belgium, email: jense_philips@hotmail.com, website: orboftorture.deathmetal.be