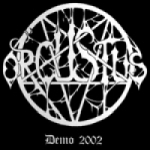 It’s very cool that there’s still a couple of bands around these days that try to keep the old black flame burning. A flame that more or less had already burned down over the last few years… "True Norwegian Black Metal" used to be a term for raw and grim music, but ever since the bigger labels started to polute the underground, by signing more and more bands of this genre, it completely got watered down in order to reach the mainstream listener as well. ORCUSTUS’ musical roots are located back in those good old days though and even their bandname (which originates from the Roman mythology and translated means "Hell" or "the netherworld") got inspired from that period, for it was the name of an old fanzine that Bard "Faust" Eithun used to publish. The band originally was founded by vocalist Taipan, who used to write the music between 1998 and 2000 and who already played it with an old friend back then, but never released it until now. In 2002, after he had moved to Bergen, he joined forces with a couple of wellknown musicians from the Norwegian Black Metal scene (Infernus from GORGOROTH on bass, ex-ENSLAVED / GEHENNA drummer Dirge Rep and ex-GORGOROTH / GAAHLSKAGG guitarist) and recorded three of his songs, which they produced with the help of Ivar Peersen (ENSLAVED). ‘Death Becomes You’, ‘World Dirtnap’ and ‘Lucifuge Damnation’ should easily appeal to every fan of the rough and basic Black Metal style as there’s no keyboards, Gothic elements, vampire shit or female vocals involved here. Just straight forward and rather sinister and aggressive Black Metal the way it was meant to be. Even though ORCUSTUS is Tormentor and Dirge Rep’s main band nowadays, you should by no means consider this as a project only, which just gains the attention because of some name dropping. This is definitely a real band, and remember that they play first class music that was written by some less known figure of the Norwegian underground a couple of years ago already! A full length album is supposed to follow in the near future as they already have some label interest (no surprise, if you have all the aformentioned "selling points" which labels do like so much these days…). Until then go for this demo CD, which sells for 10,-Euro / 10,-$ (ppd.), shirts are available for 15,-Euro / 15,-$ (ppd.). For more info check out www.orcustus.com or write to: Orcustus, Box 10, 5003 Bergen, Norway, email: taipan@orcustus.com