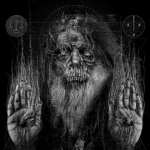 When a band has had some members playing since 1993, there is a good chance they are in for something good. This, their debut EP, contains 5 songs of some of the most dreamy, ethereal forms of Death / Black / Doom Metal that is dwelling nowadays. The guitar sound is just so good and so mystic, just perfect for what the band is playing. The influences range from bands like early SEPTIC FLESH, POSSESSED to early PARADISE LOST, CANDLEMASS and some newer bands like GRAVE MIASMA or NECROS CHRISTOS. The band is smart to play in quite diverse tempos, having faster songs and some more doomy ones, yet they always keep the upper tempo alive. There is also a dark melody in all the tracks, and is it just great how they can start in such ethereal and atmospheric way as they do on ‘Millenium’ to burst in rage in an almost hypnotic trance and with such ease that it scares. Worth a mention is the great vocal job by Rubens Nergal, with some agonizing laments here and there, he’s still got a very deep and clear cavernous voice. The execution is also great as all the members know what to do to create such sinister chants. Every one of the tracks has a very distinct aura and are played with a passion that can be heard in the speakers. Truly a killer release and for sure the future will be even better. For this pandemic year, that we are sure to remember, on of my top ten! www.facebook.com/ouroboros-solemn-1319222151556205, https://ablazeprods666.bandcamp.com