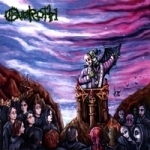 OVEROTH is a 4-piece Death Metal act coming from Belfast, Northern Ireland – and the band has been active since 2005, and even released a full-length studio album (titled "Kingdom Of Shadows) in 2010 on the Forbidden Realm label. I just got my hands on the band’s 2007 6-track EP, titled "Death Personified" – and in fact, this is my first time ever to hear how OVEROTH sound like. Well, if you like to get your daily dose of Death Metal crispy and dark sounding, down tuned – and carrying sort of an evil aura above it, with some Doom Metal influences, then here might be something also for you. To me, OVEROTH sounds like LA’s SADISTIC INTENT and Coventry’s own war machine BOLT THROWER would have been in some sort of a musical collision course – and a new band called OVEROTH would have been built up from all these wrecked pieces of both SADISTIC INTENT and BOLT THROWER. This is just some sort of a twisted thought for all of you to get an idea. "Death Personified" definitely has its moments even if the band is not able to offer anything new under the already known radar regarding Death Metal as a sub-genre of Metal music. However, I happen to like quite a bit what the guys have accomplished on this 6-track EP. They obviously know the basics for creating some enjoyable – murky and grind-ish sounding old school Death Metal overall, which makes me to ponder whether I should also track down their "Kingdom Of Shadows" debut album somewhere? Not bad – not bad at all. More at: www.overoth.com, www.rundownrecords.co.uk