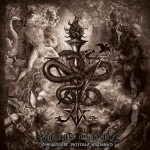 With “Omnipotense Aeternae Diabolous”, the Costa Rican PAGANUS DOCTRINA released their first full length album. Some insiders might use the word finally here, since the band started about two decades ago. The reason for this extreme delay is not only the fact that PAGANUS DOCTRINA were on a longer hiatus. Furthermore, the Black Metal scene in Central America was rather overlooked. With no right, I’d say after listening to “Omnipotense Aeternae Diabolous”. The eight songs on this album will not take Black Metal on to the next level, but they don’t need to hide behind most contemporary albums of the genre. As soon as the guitars of the opening title track set in after the ‘Overtura Infernale’, PAGANUS DOCTRINA take no prisoners and unleash a black inferno. Sometimes extremely grim and cold, sometimes pretty harmonic with melody and harmony lines even near DISSECTION – that’s the path this outfit from Costa Rica chose. The only thing that’s a little annoying every now and then is the too unnatural sound of the drums, but that’s only a tiny flaw to me. Asides from the furious and very melody-soaked ‘Aestigmata Satani – Ataviado En Fuego Fatuo’, I personally like the nearly epic ‘Los Vértices Del Cuarto Ángel’ best on this album, due to its really dense atmosphere. As I said, PAGANUS DOCTRINA won’t change the world of Black Metal, but those with a blackened spirit are welcome to check out www.facebook.com/paganusdoctrina or www.ashenproductions.net