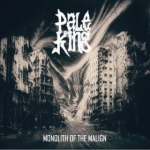 With PALE KING, we have a new band from the, in terms of Metal, glorious country of Sweden. But as new as the name is, the band consists of two veterans of Death Metal, i.e. Johnny and Hakan of WOMBBATH. Along with two yet unknown musicians as the rhythm section, they formed PALE KING to have a playground for some of their other musical ideas. On their facebook page, they name PARADISE LOST and HYPOCRISY, among others, as their influences. Add the albums “Icon” and “The Fourth Dimension” and you get a quite good impression how PALE KING sound on their first album “Monolith Of The Malign”. So, we have a musical journey back into the mid of the 1990s, when old school Death Metal has accepted the first influences from other genres and took the first steps to become a little more mature. But PALE KING are not antiquated, since their sound is fresh enough to take a stand in the present as well. In addition, the songs are interesting enough to catch the attention of the listener. Epic choirs, catching guitar harmonies and intense riffing are the trademarks of an album that has its highlights in the second half. Songs like ‘Dark Intentions’ with its violin parts in the vein of early MY DYING BRIDE, the mighty ‘Resurrected’ and the final ‘A Haunted Palace’ that even has some Black outbreaks as well. The only flaw I found on this otherwise fine album of PALE KING are the sometimes too uniform melodies and harmonies. If this doesn’t keep you from checking out an album and you’re into those mid 1990s (Death) Metal albums I mentioned, “Monolith Of The Malign” will be a nice choice. Visit www.facebook.com/paleking666 or www.soulsellerrecords.com for more information.