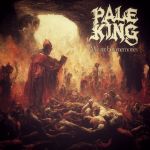 PALE KING
We Are But Memories
(Iron, Blood And Death Corporation)
35:41min

A strange assortment that PALE KING are delivering here. It took a few runs before the penny dropped for me. “We Are But Memories” sounds like AMON AMARTH – but with the handbrake on. Death Metal, melodies and epic moments, this can also be found on the second album by Mexican based PALE KING. But the eight songs sound so drippy, lethargic and anemic, as a doctor I would worry about the patient. Songwriting, quality of the riffs, the sound – all this contributes to the rather average result. A good song like ‘Cursed’ catches the ears as exception from the rest. But really good songs and / or melodies with a certain kind of recognition value are missing. To use a metaphor: AMON AMARTH are a viking drake boat plowing through the choppy seas at high-speed, ready to conquer all. PALE KING bobble on the duck pond. Well, maybe it is not that bad and comparing “We Are But Memories” with exceptional players like AMON AMARTH is maybe a bit unfair and should not be the benchmark. But I listen to Death Metal the whole day long and in terms of quality, PALE KING tend to be at the lower end. Melodic Death Metal fans should take a listen and form their own opinion by visiting www.facebook.com/paleking666 or www.facebook.com/ibdc666