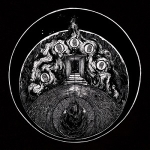 There must be something in the air in France… This year, there are a lot of new and interesting releases from the land of the red wine. PARAMNESIA is the next band to keep an eye upon. However, not much information can be gathered about this band, except that Pierre Perichaud is responsible for the drums, the vocals and also for the artwork. This self-titled album is their second (and a half) offering. “Paramnesia” features only two songs, both of them twenty minutes long and simply entitled ‘IV’ and ‘V’. If you’re looking for the first three songs, these can be found on last year’s EP “Ce Que Dit La Bouche D’ombre” (‘I’ & ‘II’) and another very recent release, a split album with German hopefuls UNRU. Well, talking about UNRU: like this band, PARAMNESIA are a band that breaks up with the patterns of Black Metal and lead this genre to new borders and extremes. Both songs combine the fury of Black Metal in an intensity like early IN THE WOODS… with Postcore like ISIS, NEUROSIS or even …AND YOU WILL KNOW US BY THE TRAIL OF DEAD, thus creating a very progressive kind of Metal. Might we call this Post Black Metal? I don’t know, at least I know that PARAMNESIA brighten up the horizon of Black Metal in a way I never expected. It’s a kind of music that needs more than one or two listening sessions to unfold it’s magic, but once I really got a hold on PARAMNESIA, it was hard to escape the fascination of the songs. Those with a black soul should check PARAMNESIA at: http://paramnesiaxpa.bandcamp.com, where you can also get their first offerings for free! Be sure to check the label as well: www.lesacteursdelombre.net/productions