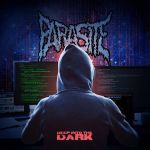 German outfit PARASITE has released their third album “Deep Into The Dark” via Rising Nemesis Records. With titles such as ‘Pink Meth’, ‘Hiring A Hitman’ and ‘Marianas Web’ there is an obvious dark / deep web concept behind it, which I found interesting for a Metal release. There has been lots of talk and discussion about what really happens behind the surface in the cyberworld. I thought it is a nice starting point. I have not heard their previous albums, so when I searched for some info, the tag “Deathcore” kept popping up. And although I am not really a Deathcore fan, I enjoy some albums by UNEARTH and THE BLACK DAHLIA MURDER, bands that also play that style. I do think that the line that separates Death Metal and Deathcore is thin and PARASITE crosses that line constantly in “Deep Into The Dark”. The album goes from slow and heavy grooves all the way to full blast and everything in between. There are a bunch of great guitar parts that combine open / tremolo picking with palm muted grooves and even some melodic passages that provide variety. Grinnoff’s performance is flawless when it comes down to solid, memorable riffs. And his vocals hit you in the face right from the start. He uses a really good and fitting mix of deep growling and mid / high grunting. On that same level of intensity, Shizzle’s bass supports and helps build that wall of sound which has become a trademark in this subgenre with a round and pounding tone. Drummer Porno (nice pseudonym, isn’t it? haha) chips in with amazing double bass and cymbal work, plus some creative fill variations. Yet, I do have to say that I don’t like the drum sound. As the album progresses, it becomes a little tiring and lifeless. But that is something that one can expect from this subgenre and today’s modern production values. Overall, “Deep Into The Dark” comes off as a huge and beefy album. The mix is perfectly balanced, although the master feels too compressed to my ears. Given the fact that I don’t listen to this style of music too often, I can’t really say if this is a good Deathcore album, but from the Metal, performance and sound standpoints, I really liked what I heard and so should you. This is one extremely solid Metal album. You can find more info on the band here: www.facebook.com/parasiteinfestation. And you can get their album from their label here: www.facebook.com/rnrecords