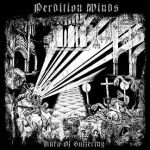 Formed in Finland, this band features three members of the Death Metal band LIE IN RUINS doing a Black Metal approach. Still there is a strong Death Metal aura in it, but that of the most obscure and in that border line where Death and Black Metal are the same, like in the cases of TEITANBLOOD, ARCHGOAT, PSEUDOGOD and others dwell. The guitar tone set the mood for the album. 6 long songs well over 6 minutes each, played in mainly a fast tempo, the band creates a quite mystic aura with some trance-like riffs, subtle melody here and there, spiced with devilish slower Metal sections, to then speed again but never falling into a senseless chaos of music, although the atmosphere is aimed in that way. The recording is also quite very apt for the style, nothing overproduced, and one can clearly listen to everything, if maybe a bit more power to the guitars would make this more massive. There is a certain charm that Black Metal bands from Finland possess, so if you like bands like SARGEIST or BEHEXEN, you will surely like this one. There is this funeral and sinister overall sound on the songs that if there is a color this music will make it will surely be a greyish black. The old school Death Metal influence is also there making this quite interesting for fans of diabolic Metal of Death like in the song ‘Temple Within’ with some parts paying homage to CELTIC FROST. Yes, maybe many riffs sound similar, yes maybe the atmosphere has been done before, but oh, yes, this is quite enjoyable evil Metal. www.facebook.com/perditionwinds, www.woodcutrecords.com