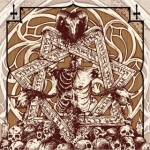 Two bands are presented on this split. Two bands from neighbouring countries where the temperature can drop very low. Two bands that perform Black Metal. Well one actually, since DRAMA from Russia disbanded in the same year as this EP was released. Too bad, because what they perform here is pretty interesting. The sound and atmosphere on their contibution is melodic and rather passive and reminded of MGLA and the likes. But also of DARKTHRONE from around 1996. Agression and hatred are almost abscent eventhough there’s some fierce blasting in the track ‘Gloria Mortis’. Vocalist Vindsarg delivers an excellent job and sounds like a mix of Satyr and Jon Nödtveidt. The band was around for 14 years and you can clearly hear this in their mature songwriting. If you like these tracks, you could check their two studio albums "Winds Choir Opera" from 2005 and "As In Empty Grave" from 2010. Especially this latter shows the band in excellent shape and more raging. DRAMA also released a live album called "Live Armageddon" (2004) and an EP from 2003 entitled "Silver Brilliance Of Nocticula". PERDITION WINDS from Finland takes part with one track clocking almost 14 minutes. This track sounds much rawer compared with the other two and ‘Cult Of Kain’ continues where "Aura Of Suffering" left off. This track is a monster with a break in the middle that drastically slows down after a hectic start, forming space for some macabre solos. After that the slumbering flame is lit again and the track ends the way it started. The production on both parts is top notch and their diversity serves as a fine balance. PERDITION WINDS made me think of LANTERN on "Subterranean Effulgence". Seems like a must for fans, especially since this is the last you’ll hear from DRAMA. For more info check www.facebook.com/perditionwinds, www.satanath.com. I read this split was co-released by Black Plague Records, so check them as well on www.blackplaguerecords.com