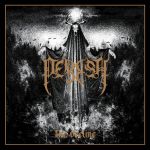 Another newcomer appeared out of the blue some weeks ago in form of PERISH from Germany. Listening to their material, the guys are definitely no newcomers as the material sounds very matured. And yes, MISERY SPEAKS was one of their projects in the past. But the opener ‘Joyless’ offers a different direction and shows their love for 90s melodic Black Metal from Sweden. But even though I would have liked it anyway, PERISH is not another DISSECTION clone. The sound is clearly based on the 90s influences but ‘Joyless’ also offers a Post Black Metal painting and some classic Heavy Metal tunes. Vocals, guitars, drum-work and punky guitars really make this track a good starter into this fine first album. ‘Relentless’ even increases the quality level and offers very solid songwriting with a good doze of groove and freezing lead melodies. Bands like UADA can be named here as a hint what to expect, but PERISH surely have found their own interpretation of the theme especially when they calm down and strings and drum work get thoughtful. ‘Soulless’ could easily have fitted onto the first mini CD of mighty DARK FUNERAL and offers this 90s charm I personally still search for and not too many bands can compose that way. ‘Sleepless’ again starts very calm, with another huge touch of classic Heavy Metal, mixed with some Black Metal, before a melodic side appears at the end which offers similarities to older KATATONIA, but definitely played faster with a Post Black touch. ‘Breathless’ again is a bit faster and convinces with its memorable lead melody and fine instrumentation before ‘Hopeless’ closes the album with some punky Post Black tunes. The album is a nice surprise with a well-fitting artwork and good production and definitely is worth to check for every Black Metal lunatic who still can’t get enough of what has been started in the early 90s by No Fashion Records. www.facebook.com/perishhorde, www.facebook.com/supremechaos.de