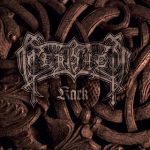 I’m not familiar with this Black Metal act called PERISHED although it is a really old band that is not active anymore today. I have read their first demo is from 1993 so it means they were contemporary to really important Black Metal acts like MAYHEM, ENSLAVED, IMMORTAL among others. Anyway, “Kark” is their first full-length released back in 1998 and reissued on CD the current year by Aeternitas Tenebrarum Musicae Fundamentum from Italy. The first song is an instrumental track played on acoustic guitar to give way to ‘Imens Vi Venter…’, a mid-paced atmospheric composition that reminds me of their countrymates KVIST (even in the vocals department). The introduction of keyboards here and there works very well for their style, sounding sometimes close to early ARCTURUS (think about “Aspera Hiems Symfonia”). For the next track, ‘Stier Til Visdoms Krefter’, keyboards take greater relevance. Again, mid-paced rhythms and some melodic passages. Close to the end, the song turns into a faster one, but as was said, the keyboards are present all the time. ‘Iskalde Strømmer’, the fifth track and one of the longest songs here, starts with some fast stuff to slow down later, just before the third minute. After that, you can listen to some fast stuff again. The song ends close to the ninth minute with a nice piano outro. ‘Renheten Og Gjenkomsten’, the eight track, is one of the best songs here. The first minute has the best riff in the entire work. Some strong CELTIC FROST influences can be heard here. The atmosphere that gives the keyboards work on the entire album is undeniable but for my taste sometimes is completely unnecessary. Anyway, I understand that at the time it was an interesting resource for not a few acts of the same genre. This reissue contains three bonus tracks. One of them is an unreleased track titled ‘A Landscape Of Flames’, probably from the album sessions since it sounds similar to the previous stuff. Two more are taken from their 1996 homonym EP (‘Kald Som Aldri Før’ and ‘Gjennom Skjærende Lys’). The style and production are not far from everything that you can find on the “Kark” album. Since I really enjoyed their high-quality art and recognize some similar elements to their contemporary countrymates, it’s worth checking out! Get it here: www.atmf.net