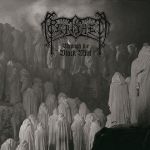 PERISHED
Through The Black Mist
(The Sinister Flame)
36:29min

This reissue of "Through The Black Mist" by PERISHED is a pretty interesting collector’s item for those who, like me, are obsessed by the Norwegian Black Metal scene from the early 90s. This is a recording session from 1994, originally released as a demo tape and now reissued on CD and vinyl by the Finnish label The Sinister Flame. Ok, let me be clear, this is not a masterpiece of Norwegian Black Metal, but I think it’s a significant witness of the early ’90s in that country, when many bands that had started to play Death Metal were changing their style to a more Black Metal influenced sound. This studio session is by no means comparable to the most important Black Metal titles from those years: it’s neither IMMORTAL nor BURZUM, MAYHEM, CARPATHIAN FOREST etc. By the way, this is a demo that I consider interesting for getting an idea of those young "second class" bands, that were trying to make a name for themselves in a revolutionary scene like the early Norwegian one. PERISHED is one of those "wish I could but I can’t" bands that fell into oblivion, due to their mediocre and irrevelant offer. Here we have seven tracks of raw, pretty melodic and lo-fi norwegian Black Metal for almost 37 minutes. This is a mere example of immature Black Metal in the vein of early BURZUM, early DIMMU BORGIR and SATYRICON. I have to admit that "Through The Black Myst", despite being a clumsy and uninspired attempt to ride the wave of those years, is an enjoyable little album with an obscure and genuine Black Metal touch. The typical raw guitars with tons of tremolo picking, a primitive but effective drumming, some scary and depressive screamings: this is the recipe used and abused by PERISHED. The bad points can be summed up in the exaggerated use of a cheesy and boring synth, as well as some parts with clean vocals. An extra point goes to the cover artwork: a very obscure and mysterious image that oozes evilness. In conclusion, should you buy this reissue? Yes, if you’re a fan of early Black Metal from Norway, I think it will be an interesting addition to your collection. www.thesinisterflame.com